This blog is translated from the Bengali write up of Professor ASM Mahbub un Nabi (former Faculty, Department of URP, BUET

The political power of Bangladesh is concentrated geographically in Dhaka and vested individually in the Prime Minister. In these circumstances, it is difficult to realize the success and usefulness of the decentralization of administration and economy.

(1) The population of Nepal, a SAARC member country, is about 25 million. There are 5 provinces in Nepal.

(5) The number of population in Japan is about 125 million and the number or provinces is 47. The Tokyo Metropolitan city is formed by including three provinces.

Various types of complexities arise as the city grows. It is very critical, expensive and difficult to plan and manage big cities; especially those with population above 5 million. Keeping the size of the city within a limit is conducive for planning and management.

Bangladesh is an exceptional country in the world. There is not provincial system despite of being a large country. Due to mono-centric in nature, there is a huge pressure of population on Dhaka city. The effects of this population pressure result in multifaceted urban problems, i.e. traffic congestion, housing shortage, lack of recreational places, drainage and sewerage problem, waste disposal, environmental pollution. If this burgeoning pressure cannot be significantly reduced, it is impossible to solve other problems. Especially, the traffic congestion problems cannot anyhow be solved.

Retarding the population pressure on Dhaka city will not be materialized without  taking up the provincial governance system. Decentralization of political power through adoption of provincial governance system can make the decentralization of population in the cities and towns of Bangladesh. If the political power can be decentralized, administrative power, economic power and social services and facilities can be easily decentralized.

I propose to divide Bangladesh in total 11 provinces to ensure a balanced distribution of population among the cities/towns and therefore ensuring a balanced national development. The proposed 11 provinces are shown in the table as well as in the map. 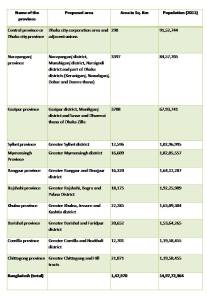 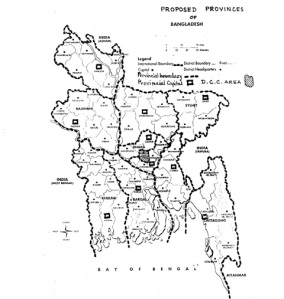 If provincial government is formed as I have proposal, sizes of the provinces should not be much. Thus, the people of the provinces can return back to suburb/rural home after finishing daily work at the provincial capital. It will discourage the people to start permanently living in the capital and so population pressure will not be so huge.

If the provincial governance system is adopted, the following ministries will be under the central government:

(i) Ministry of defense;

(vi) Ministry of port and shipping;

And the provincial government will administer the following ministries:

(i) Ministry of agriculture;

According to my proposal, if Dhaka city corporation area is transformed into the Central province or Dhaka city province, Ministry of agriculture, Ministry of Local govt., Ministry of Irrigation and water management etc will not be required. So, all the stuffs under these ministries will have options to move different provinces and the number of total stuffs in current secretariats would become lower as much as one tenth. Besides, the BADC building at Motijheel, Motso vobon at Kakrail, LGED buildings at Agargaon under different ministries will become fully empty because they will have no function in the DCC area.

Once the sizes of different ministries are reduced due to provincial government system, activities of the associated contractors, suppliers and business institutes will be substantially shrunk. So they will have to move from Dhaka. Population in DCC area will start to decrease in size. Many private house and apartments will start to lose tenants, therefore, the house rent will be lower, and prices of houses as well as land will follow same. The real estate companies will not need to construct new houses/apartments within DCC area. The construction workers have to go out of Dhaka.

An increase of investments can be seen at other provincial capitals. In this way, they will be enriched. There will be an acceleration of balanced development across the country. Also it will be possible to plan for a balanced urbanization and ensure its progress. Inflation rate will be much lower and the country will see prosperity. Ease of mobility will help increasing foreign direct investment.

More than 0.1 million people comes to DCC area everyday and similar number of people exit from DCC area too. If provincial government is established, people can perform their daily activities at provincial capital. Thus, the daily huge inflow to Dhaka will get lower. Once the inflow will get lower, it will be not required to expand Dhaka-Chittagong highway into four lanes, so is Dhaka-Mymensingh highway. Padma Bridge may appear to be unnecessary too. Traffic problem of Dhaka can be solved even without constructing elevated expressway type big projects. Therefore, given my proposal is implemented, it is possible to solve the traffic congestion problem in Dhaka without any big investment.

The inhabitants of Dhaka are really suffering a lot. I have written this article being sympathetic with them. I beg pardon if any mistakes are found in this article or anyone dislike the proposal.

6 thoughts on “Decentralization and Balanced Urbanization”