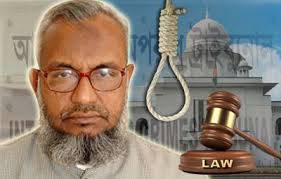 By M Ahmedullah, PhD in Politics and Epistemology:

Those who support the Bangladesh War Crimes Trial and are cheering at the hanging of Mollah, wrongly believing that similar to what the Nazi did in Europe during the 2nd World War was done by the Pakistani army with the help of Jamaat, will never be able to, with full joy and moral confidence, proclaim that justice has been done. The killers of Mollah and their supporters can only enjoy brief moments of bloodthirsty euphoria as it cannot last for long. This is because Mollah was not given a fair and transparent trial and the whole world knows. It was a cooked up process designed to kill Mollah and others using the justification of the judiciary and state power / resources.

The supporters of Mollah and those who are opposed to the Bangladesh ICT as it has been operating, due to immorality, involvement of party politics and judicial perversion, will always have the high moral grounds and justifiably feel that a big injustice has been done. These include people who fought for Bangladesh bravely in 1971. Previously, only one side in Bangladesh had the monopoly of narrative generation and dissemination and they used arts to educate and mis-educate people about the war, rather than science and evidence. This time and in the future they will never have that monopoly again, neither will they possess the high moral grounds, which they had for about four decades, with some justification but mostly due to the dominance of their narratives.

The AL, their supporters and Shahbagists will forever be haunted by the injustice and perverse use of the judiciary carried out to achieve political goals. They will never be able to justify what they have done, morally, rationally, legally and with evidence in support of their political use of the judiciary. They will be reminded of how unjustifiable were what they did and supported. They will be challenged, disturbed and hounded wherever they try to raise their heads in support of this judicial murder and the war crimes trial.

The clear perversion of the judiciary in this case means that Mollah’s execution will be seen as an innocent man who has been judicially murdered. Even if Mollah was guilty of some or all of the crimes that he was accused of being responsible for, as a fair trial and transparent and credible court have not made a judgment based on hearing and examining the evidence, the supporters of the execution of Mollah will never be able to confidently claim and successfully proclaim that he was a war criminal. There will never be another chance to prove that Mollah was guilty of war crimes. Therefore, Mollah through this hanging has become an innocent martyr, judicially murdered for political reasons.

2 thoughts on “Why Has Mollah Become An Innocent Martyr?”