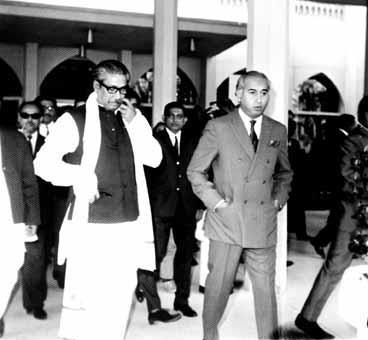 December is the month of victory.  Tomorrow, we will mark — I choose not to use the word celebrate quite intentionally — Victory Day, which marks the military defeat of the Pakistani occupation forces in 1971.  But December is also the month of election — in December 1970, people of this land used their right to vote, for the first time in history.  Sheikh Mujibur Rahman’s overwhelming victory in that election marks the political defeat of the idea of Pakistan.  Ironic then that this December, the very right to vote is under threat in Bangladesh.

I’ll leave it to better informed people to discuss today’s crisis.  Allow me the indulgence of some historical curiosity today.  Over the fold is the speech by Sheikh Mujibur Rahman that was broadcast on PTV and Radio Pakistan before the December 1970 elections.  This speech is notable for a number of reasons.  It was delivered in English, and Mujib was addressing the West Pakistani ruling junta and the local and foreign establishment.  It was Mujib’s chance to tell the powers-that-be what a Mujibist government in Dhaka would mean.  This was the closest thing the outside world had to judge Mujib.

What he said, and didn’t say, gives us important clues about what he wanted to do with his impending election victory.  Consider, for example, his choice of the word for the country — not Bangladesh, definitely not East Pakistan, but Bengal.  Mujib repeatedly refers to Bengal, even when he mentions the damage Farakka would wrought.  Bengal had a very specific meaning to the people of Mujib’s generation.  Why Bengal, and not Bangladesh?

While he used the word Bengal, he steps well short of cultural nationalism or identity politics.  He makes his case not in terms of Bengali identity, but on economic disparities.  He talks about the oligarchy that was Pakistan, stressing the solidarity between Bengal and the ‘downtrodden people of West Pakistan’.  And he grounds his economic arguments not on the rhetoric of class struggle, but in terms of West Pakistan’s foreign exchange earnings and development expenditure.

Establishing the case for the Six Points, Mujib specifically stresses that the federating units should have the control over monetary and fiscal policy, foreign exchange earnings, and foreign trade and aid — that’s more power in Dhaka vis-a-vis Rawalpindi than most European capitals have vis-a-vis Brussels.  And then he warns the ruling junta against using force, echoing Malcolm X’s ‘by any means necessary’, foreshadowing ‘dabaye rakhtey parba na’.

But in general, he falls well short of any revolutionary rhetoric or calls for armed struggle.  Indeed, the whole speech is noted for its moderation.  He spends at least half the speech about his economic programme should he win power.  It’s standard fair 1970s era populism.  Would it have worked?  Probably not. But this was a time when Richard Nixon was imposing wage-price controls and proposing socialised healthcare.  Compared with the others of his time — Bhutto’s roti, kapda aur makaan or Indira’s garibi hatao, let alone the communists — his stuff was moderate.  Yes, he talks about nationalising banks or land reforms, but there is no tirade against multinationals, no calls for collectivisation or peasant communes.  Hell, he wants the private sector to make a robust contribution.

He begins the speech noting Awami League was created by HS Suhrawardy to thwart a one-party state in Pakistan.  He acknowledges the Muhajirs and the Chittagong Hill Tracts.  The irony of the Mujibist reality is self-evident.