I wrote earlier, how the propaganda strategy adopted by the current regime in Bangladesh is stunningly similar to that of the Nazis in 1930s and 40s; I held this view long before the rise of Shahbag.

As a result, I have often receive few kinds words from fellow “sushils” who seems to think of this as a political blasphemy. In my personal opinion this sheer horror is generated by most sushil getting Fascism confused with dictatorship ( a hated one, that is) ; because I often get asked if I have any doubt about the massive public support AL  commanded. “Hey, Hitler was popular too” – is always my simple answer.  The point is, a Fascist regime does not necessarily need have zero public support, in the contrary history shows us that Fascist regime can start off with significant public support or the delusion of so.

Fascism as an ideology is quite hard to define, however it has been proven to display some common characteristics. A close observation of these characteristics, with comparison of current Bangladeshi regime can that the fear of rising fascism in Bangladesh might not be yet another political claim.

Extreme Nationalist, combined with a totalitarian authority is Fascism’s distinctive property. Fascist regimes, throughout the history made constant use of extreme nationalism. This serves the purpose of creating the common ground for creating a “mass movement” in which the middle-class can prevail. This also creates a sense of comradeship, a mindset of being in a “war” with the political opponents and a sense of sacrifice for the mission of  national regeneration.

In post-world war 1 Germany, Hitler’s Nazi used the national regeneration theme with colossal success and sold Nazi party to be the only viable option to regain the lost Germanic pride. While the Nazis used nationalism in the backdrop of a lost war and “humiliating” Versailles Treaty, Bangladesh’s fascist could not have used such tactics in their ground for mass movement because of two problems. Firstly, we don’t have a lost war, we have a war where we were valiantly victorious against all odds.

The second and much bigger one is that of India; any self-respectful patriotic or nationalist movement is bound to be vocal about the biggest and greatest aggressive entity the nation has been facing for over four decades, in Bangladesh’s case which is India with its border aggression and BSF brutality, water sharing issues and economic and cultural aggression etc. As India also happens to be AL’s greatest foreign ally, the AL intelligentsia needed to conceive a different type of nationalism.

As a result, a fusion is created where AL, the leftists parties, liberation war, 71, Father of the Nation etc are jumbled in to a fallacy called 71’s “chetona” and the fascist propaganda machine played its part in sanctifying this so called chetona. This does a lot of good for a fascist movement in rise; it gives them a ground for mass movement, takes the focus of any patriotic sentiment away from India, gives AL the right to identify anyone as the enemy of the chetona and gives the young hot-blooded recruits a shadow war to fight against the so called enemies.

The young generation trapped into this fallacy grows up learning that the chetona is sacred, so much so that a regime can do it whatever it likes in the name of 71. They never stops to ask  why the leftist party leaders today becomes the guardian of 71 when they stayed away from the liberation war describing it as the fight of two dogs, they never ask how media censorship is aligned with the spirit of free democratic Bangladesh. They never hesitate  to call Kader Siddiqui, the 71 war hero as a “razakar” and idolizes certain sci-fi author as national hero and forgets to ask him why wasn’t he in the war front in 1971.  These ultra nationalists are so lost in their fallacy that they forget to demand justice for Bishyajit, they chant “Fashi ” and not “Justice”   and while in the nation is in turmoil, they are happy setting the world record for creating the biggest flag.

This patriotism is extreme, blind and delusive; it teaches young men to dresses up in green and red the regime is killing democracy; it teaches them to shut their eyes and rejoice the coming back of the saviour of chetona while the regime is self electing itself for a second term and moving towards a total authoritarian structure.

Another important aspect of the German Nazi ultra-nationalist is its display through paraphernalia. There were slogans, mottos, songs and flags. A similar trend can be observed in Bangladesh, especially in regime backed rallies, gathering etc; there is a inclination of creating this delusion of unity and a silent  effort of  fuelling the urge to join the common ground of chetona. 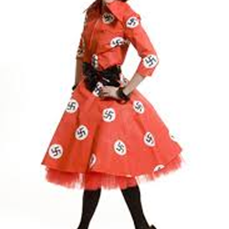 The way the current regime has created the fallacy of Nationalist and were able to create a cult culture around it is very similar to the ultra nationalist extremism created by Nazi regimes in the past and it does make one to wonder, Is Nazism rising in Bangladesh ?

( Thanks to work of R. Verma and Emilio Gentile)