In reply to my article in ‘Classical Music Festival 2013, India and our vulgar civility,’ published in this blog, writer Tibra Ali in a blog of AlalDulal, borrowing a term from the Czech writer Milan Kundera, accused me of being a Political ‘Misomusist,’ to refer a person who hates arts.

He dismissed my effort of raising an important point about the political process behind this festival as ‘pot-shot,’  that tries to invalidate the rich and shared cultural heritage of South Asia.

Ali, further mentions that against his intention, he had to write criticism of my ‘so called political commentary ’ cause he is worried that people might be misguided with my intention of raising a point about politicisation of our culture space and he stresses that events such as Bengal Music Festival celebrating Indian classical music requires to be evaluate apolitically, otherwise we’ll do a ‘great disservice to us as people.’

I think, Ali’s careless use of words such as ‘pot-shot’  to reject my argument without defining ‘pot-shot,’  his intention of not explaining the historical context behind the emergence of the term ‘Misomusist’  and  how it applies in my case, reveals what I call a ‘fundamentalist’ pattern in his reaction. This pattern underpins emotional not logical reaction of a person who is not willing to accept logical discussion and engage in a respectful debate on an issue or belief that is close to their heart.

We see such reactionary pattern in radical Christians or radical Hindus or radical Islamist who use ‘quotes from Holy Books’ to dismiss opposing views but ignore explaining the historical context behind the emergence of such quote and relevance of using it in present context. Researchers found that in most cases, literal use of quotes or terms, that were emerged in a historical context, does not do any justice to the term itself if  used in present context. Therefore, I am interested to know more about the history of ‘Misomusist’ and relevance and explanation for using the term to define my work.

Before going into the main response, let me clarify two points raised by Ali. Firstly, quoting Afsan Chowdhury, Ali said, usage of Felani in my writing serves ‘narrow political purpose.’ This is an  interesting and a vague statement. If I agree with Ali and Chowdhury, I wonder, would they agree with the argument that the construction of Jahanara Imam as a Shaheed Janani, or Bangabandhu as the Father of the Nation too serves narrow political interests?Even if they agree, one would raise the question, so what?  I’m in support of ‘narrow political interest’ as I think this is the reality in which we have to live, at least at the moment.

Secondly, I think Ali is right in spotting the disconnection between my careless use of ‘public demand’ and ‘a section of upper middle class’ in my writing. Even though I did not mean upper middle classes are excluded from public, my careless use of the two variables gave such impression to Ali. I think this is a fair point. Let me now answer main criticisms’ of Ali.

However, I’m afraid that Ali missed the whole point of my writing. While I’ve been trying to raise awareness about the political process behind the organisation of such ‘musical festival,’ Ali seems busy justifying the usefulness about the content or ‘art’ of the festival. I find premise of such criticism is irrelevant, misguided and unnecessary as a reply to my piece as both of us are answering different questions.

However, Ali’s delusional approach about ignoring the political process behind organisation of this ‘musical festival’ makes my point stronger. An audience must know about the political process through which this event was organised. One must also know why they are listening to this genre of music at a period when India- Bangladesh are striking what Badruddin Umar said, ‘unclear deals supporting Indian imperialism in Bangladesh and against the interest of Bangladesh’ and when powerful Bangladeshi liberals decide to cover up/ not questioning dirty tale of political and economic arrangement between AL and India, subverting public interest.

One must know further, who are the key actors behind this festival and what is the broader objective behind this program. Or why pro-government and anti-BNP civil society forces alongside with Indian High Commission officials have seen to be supporting such program. Or what is the key objective behind the promotion of ‘what ITC-SRA,’ one of the organisers of the program, says, ‘propagation of Hindustani Classical Music in Bangladesh?’  and finally why this program is exclusive of  presence of any BNP leader in capacity of guests? Is it incidental? I guess, these are not co-incidence and apolitical arrangement!

Awareness about the nexus between the process of a production and identification of actors involved with production and the nature of the content of production have always been a politically significant question. Otherwise, the liberals of Bangladesh or a section of it, wouldn’t raise questions about the nexus between extremism and some  preaching session or Waz Mahfils, content of which may soothe some listeners’  apolitical spiritual hunger only. The point is, it is plausible to evaluate Waz Mahfils apolitically but that does no rule out the political side of that Mahfil.

Similarly, one must acknowledge that application of an apolitical framework to understand ‘classical music festival’ does not invalidate the political nature of the event or nullify political aspect about heavy engagement of influential political actors of certain quarter behind this program.

I argued that this festival is an event promoting public diplomacy of Bangladesh and India, supported by the partnership of two corporations (Bengal and ITC-SRA), to influence public attitudes in a manner that they become supportive of their foreign policy and national interests. I stand by my point.

I argue that the political intention of this event is to neutralise negative public image of AL-India nexus that has been striking ‘unclear deals’ and now undermining public voice while ready to put peoples’ lives in danger knowing that BNP would unleash a violent protest if AL does not step down even though 90% people of the country said they want an election under a neutral caretaker government. I also defend the using  the death of Felani as a symbol that refers Indian disregard to the  people of Bangladesh. I see there is little scope of disconnecting the timing of this event and political upheaval on the ground as organisers of this festival and mastermind of political doldrums are close allies, if not same actors.

Therefore, my point about our vulgar civility of not protesting double standard of Indian policy is justified.

Finally, I am in full favour of exchanging cultural languages across political boundaries. I am also in favour of celebrating ‘Hindustani Music’ in Bangladesh and Bangladeshi music in India. I think constructive flow of cultural ideas is an important aspect to underpin cultural bondage between two countries  in order to serve common political interest.

However, I am not in support of Ali’s apolitical approach, if it is not intentional, to understand this event. I call Ali’s approach a ‘comfortably numb’ approach, borrowing the title from a famous Pink Floyd song, to underpin his state of delirium detached from reality to justify his disregard to political process of this program. For that matter, his effort of borrowing a term from Milan Kundera to define me as a ‘Misomusist’ is a reflection of his ‘comfortable numbness.’ This is a poor choice to justify his ‘vulgar civility’ by which I mean selfish and unquestionable justification of endorsing a process deeply rooted in a questionable political arrangement which formed a legacy to disregard popular opinion of Bangladesh. 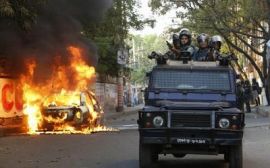